How many weeks does it take to change a light bulb?

Step 1: Remove old bulb to determine what kind of replacement to purchase 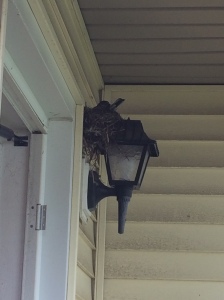 Step 5: Move all usual front porch activities to back patio 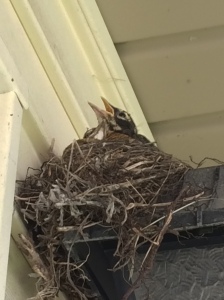 The End of the Hiatus

Why hasn’t any new content been posted in about a year?

I’ll blame the troll we found sealed in the crawlspace.

The Cavern of Sadness 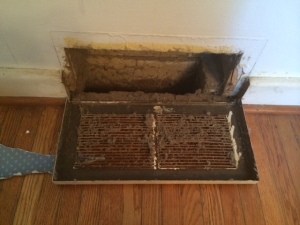 This is actually one of the better looking ducts.

The Chimney has Specific Taste in Beverages 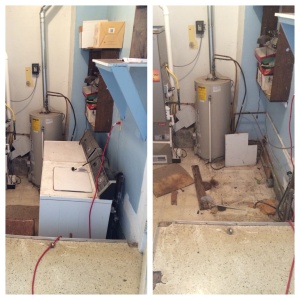 Found Big Bird.  Here he is, doing Big Bird stuff, which apparently mostly consists of hiding under a dryer for a few decades.

The volunteers carefully shut off the water hose that was connected to the washer.

This in no way, shape, or form needs to be fixed.  Should last at least a hundred years.

A little water was left in the hose, but no big deal–the laundry pit is equipped with a drain.  Except when I came back the next day, there was a lot of water on the floor with a floor drain.  I figured something was clogging the drain, so I pulled off the drain cover.

Because a floor drain in a laundry room is the perfect place to pour your leftover concrete.

We had some tree work done recently, so we were able to ask the tree guy what the giant vine growing on one of the ash trees in the back was. 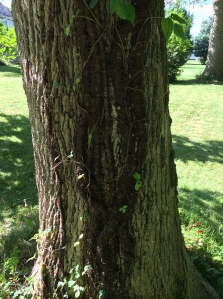 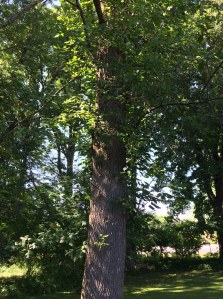 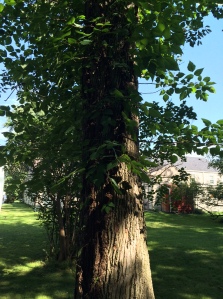 Having spent lots of time outside going to (and later working at) summer camps that had poison ivy, I can sometimes identify it if I see it hanging around on the ground like a normal plant.  I just never realized it could also take the form of a giant, tree eating vine.

Now we have to kill it and hopefully find someone willing to remove it.   Because like many monsters, killing it won’t actually prevent it from future attacks.  The dead vines remain poisonous for years.

Clearly it’s not a new vine, so I have no idea why it’s just been merrily growing for years with no one doing anything about it.  At some point in time, I feel like someone might have said “Hey–let’s take care of that monster poison vine with really low hanging branches that anyone could accidentally walk right into.”  Or “Hey, I wonder why I get a terrible rash when I go out to rake leaves in the fall.”  Before we tackle the tree we’ll talk to the neighbors and see if they can shed any light on the whole situation.

But now we know: Leaves of three eat a tree.

Since I haven’t posted in a bit, I assume most of you have drawn the perfectly logical conclusion that the house is alive and tried to kill us. In support of that theory, let me share a short anecdote. There we are, in the house at midnight, because after seeing “Dawn of the Planet of the Apes”, followed by a trip to the diner, checking out the floors under the newly pulled carpet seemed like a really good idea. Particularly considering two of the three rooms that we needed to look at don’t have lights. Naturally, we’re just about done when we hear a bang of some sort. It’s clearly coming from either the basement or the room right over the basement, but it’s sure not the furnace, because that’s in the laundry pit. I mean, I suppose it could be the old, unhooked furnace in the crawlspace coming back to life. Or a former owner, who didn’t get the memo you need to move out when you die. Of course, I instantly wanted to know if I was the only one who heard the noise, because I’ve been told I have an “overactive imagination” (aka: not everyone has ghost-hearing abilities), but my fiancé heard it too. Naturally, he said something super helpful like “Well, you’ve been saying you wanted a ghost”, or “I thought you said no one died in here”, or “Why don’t you go down to the basement and check?” Something like that.

Clearly, I wasn’t going to go down to the basement. And I didn’t want my fiancé to go, because it felt sort of tacky to ask him for the car keys first in case he didn’t come back upstairs. So like many things in the house, we ended up tabling the investigation for another time.

“Blah blah blah, when is she going to show us pictures of the floor?”, you’re probably all saying. So here you go. 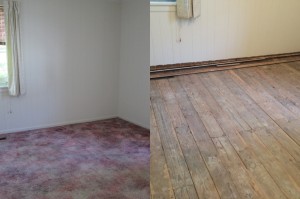 The back room.  The pink carpet was so old that I think it was put there before the house was built.  The ad had said “wood floors under carpets”, which is true, if you count a subfloor.  (Note: We found this out before we made an offer, so it wasn’t a surprise.  Extra note: this is the room the mystery noise came from, so also pictured is the ghost.) 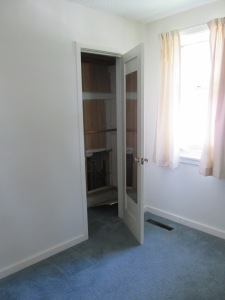 Let’s talk about the front room for a second. The carpet was clearly chosen without regard to the door and closet door, because they couldn’t be opened or closed once the carpet was in. Apparently the previous owner never needed to open or shut his closet door, since it appears to have remained in the same position for years.

However, attempts were made to shut the door to the actual room. At no point in time did someone say “Hey, maybe we should sand down the bottom of this door so it can open and shut with ease.” Instead, brute (and unsuccessful) force was used to try to open and shut it.

Here is the door.

Here is the rest of the door sitting next to the door.

The good news is that the doors now swing freely. The bad news is the floor. The contractor’s best guess was that someone once glued an indoor/outdoor carpet on the floor, because hey, why not? 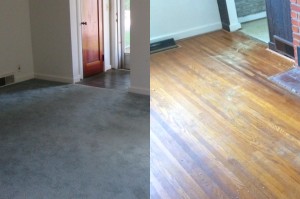 Finally, the living room. And this floor? This floor was just fine. 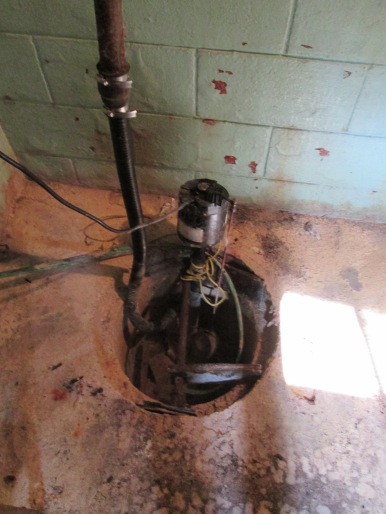 I know that on the surface, the sump pump looks about as reliable as the boiler in “The Shining”. But unlike that boiler, this sump pump is held together by tape, string, and plastic garbage ties. 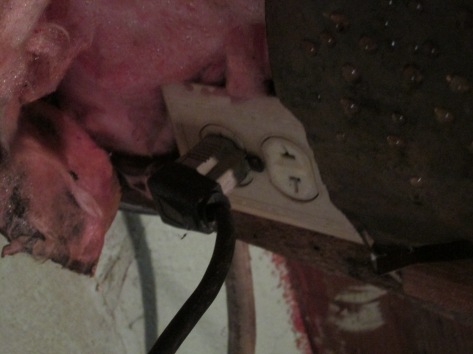 Hot, dry weather getting to be too much?  Come visit our basement, where it’s 60 degrees and rainy!

(Note: This space will not be used as a guest room.  The ceiling is far too low for that.)

Time needed for project: about 1 min (plus about 30 min. to shop)

Step 1: Dry hands on pant leg because the towel that was left in the bathroom looks like it wants a starring role in a remake of “Outbreak”.

Step 2: Stand in the paper goods aisle of Walmart agonizing over quality vs. price of paper towels for at least 10 min.  Triumphantly make your choice, put the paper towels in your cart, and then notice that the more expensive paper towels have a $1.00 off coupon stuck on the package.  Replace choice with better choice.

Step 3: Repeat step 2 in the aisle that has garbage bags.

Step 5: Use bottle of hand soap purchased in Step 4 to push bar of soap that has things growing on it into the waste basket.   Use paper towel to pick up hand towel and place in waste basket.  Arrange new items.